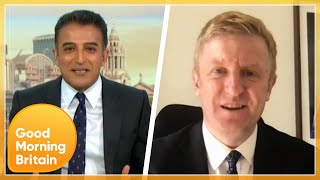 Adil Ray is widely known for his career as an actor, television presenter and comedian. The co-creator and writer of Citizen Khan, Adil has had audiences in stitches with his comedic talents. More recently, Adil has come to the forefront of the media as a guest presenter replacing Piers Morgan on Good Morning Britain. He is also widely booked as a host and diversity and inclusion speaker, calling out the prevalent racism in our country.

Beginning his career as part of a pirate radio station and DJing, it wasn’t long before Adil was speaking live on air for big stations such as Ministry of Sound Radio, Choice FM and Century Radio. Adil first joined the BBC as the presenter of the Adil Ray Show on BBC Asian Network- a show that earned him the 2008 UK Asian Music Award for Best Radio Show. From that point on he became a regular on Radio 5 Live, presented the British Asian Arts and Lifestyle show Desi DNA and presented Is It Coz I Is Black?– achieving a nomination for a Royal Television Award.

Adil is also widely known as the replacement for Piers Morgan on Good Morning Britain and is often a guest presenter for other staple hosts on the show. Adil has been a regular presenter of coverage concerning the Covid-19 pandemic and is also the presenter of Lingo, a word-based quiz show. Adil has also claimed nomination for the Arts and Culture Awareness Award at the British Muslim Awards and been appointed OBE for his services to broadcasting.

Now booked as a speaker for corporate events, Adil Ray is revered for his passions in diversity and inclusion- speaking out in the media about systematic racism and political correctness. Often a subject of racism during his presenting jobs, Adil has regularly highlighted the racism that continues to be prevalent in society and the importance of acceptance regardless of a person’s race, ethnicity or religion. Now booked as a host or speaker for corporate events, Adil uses his television experience to become an impactful diversity and inclusion speaker for all manner of events.

To enquire about Adil Ray for your event or corporate function, simply contact us via agent@diversity-inclusion-speakers.com or call a booking agent on 0203 9816 297.